Ilayathalapathy Mass All the wayAt last Ilayathalapthy Vijay's 'Bairavaa' trailer has released at 10 pm.As reported earlier the trailer is a proper extension of the teaser released in October.The cricket fight shot, punch dialogues and many other shots from the teaser comes fully in the trailer thereby conveying a clear meaning and more goosebumps for fans.The one minute 48 secs long trailer is dominated by the scintillating presence of Vijay. He utters punch dialogues and engages in a cute romance with Keeerthy Suresh, who gets a longer presence in the trailer than teaser.

Vijay appears in white and black suits in songs and that is going to be a lavish treat for female fans.The glimpse of the Court room scene in which Vijay utters a little lengthy dialogue promises to be a highlight of the film.The trailer carries the bgm of of the Bairavaa theme by Santhosh Narayanan which matches well with the proceedings.

Praveen K.L's trailer cut is clever enough to not provide any clear hint about the story, but still manages to bring the mass entertainment content if the film which will draw the fans to theaters. Rich production values is another plus.The trailer in short is an apt curtain raiser for a Ilayathalapathy Mass family entertainer with a strong story angle that director Bharathan and the team have in store for us. 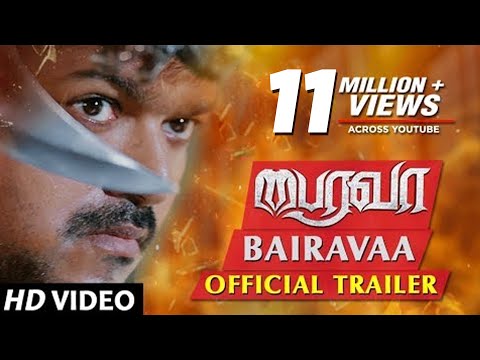