First Look Teaser of 'Om Namo Venkatesaya' is no match to Akkineni Nagarjuna's devotional films such as 'Annamayya', 'Sri Ramadasu' and 'Shirdi Sai'. That's the first impression one gets upon watching the promo.Entire Star Cast including Anushka, Jagapathi Babu, Pragya Jaiswal, Vimala Raman and Rao Ramesh appeared in the teaser. But, None of them were able to create a big impact.While the Visuals were colorful just alike any of K Raghavendra Rao's creation, The track composed by Keeravani isn't as appealing as it should have been. Someone with a stature could have been chosen to reprise the role of Lord Venkateswara Swamy.'Om Namo Venkatesaya' is in post-production stage. Visual Effects work is happening right now. February 10th release is being planned. 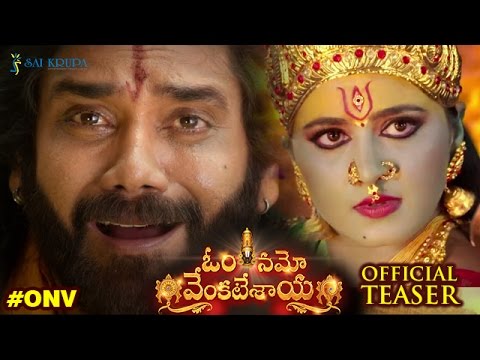